Drawing or painting a picture is a great technique to convey one’s thoughts. Within the broad concept of industrial design, engineering drawing or technical drawing is an essential skill for designers working with the production of real objects.

Engineering drawings use standardized language and symbols to accurately and visually communicate all the information required to manufacture a product or part.

This guide is designed to help you create a clear engineering drawing understanding that accurately communicates your design intentions to your suppliers.

What is Engineering Drawing?

Engineers use engineering drawings to convey information about a particular object. The term “detail drawing” refers to a drawing that is commonly used to specify the geometry required for the building of a component. Even the most basic components require a lot of drawings to fully describe them.

An engineering drawing can be used as a starting point for the creation of more comprehensive manufacturing drawings, manufacturing blueprints, mechanical drawing, dimensional prints and more. Detailed information about the drawing, such as who drew it and who approved it, is contained in a title block or information box.

Why Use engineering drawings

The engineering drawing of a single part provides a visual representation of the structure, dimensions, tolerances, and other requirements of a part. In the manufacturing industry, a single part drawing is often used as the unit of processing.

An engineer can make use of an assembly drawing to show a machine/equipment that is assembled from several parts to achieve a certain function. Assembly drawings are often used to verify that the actual production of individual parts meets the assembly requirements.

How to Prepare an Engineeringl Drawing

There are two common methods of engineering drawing: manual drawing and computer drawing.

Drawing boards, paper, rulers, calipers, and round gauges are essential tools for manual drawing. Suitable for university courses, they play an important role in developing the spatial imagination and conceptual skills that underpin creative thinking in university students.

Computer drawing, commonly used in CAD software, is more suitable for the contemporary manufacturing industry. Machining centers equipped with CNC systems can read data and information directly from digital files and generate machining programs accordingly, saving time and effort. At the same time, computerized drawing facilitates the modification of drawings, on the one hand allowing different versions of the design to be retained, and on the other hand eliminating the tedious process of manual drawing.

Basic Components of an Engineering Drawing

The document’s title in an engineering drawing block is found in the bottom right-hand corner of the page. Also known as the information blocks, it includes the part name, the names of the people who worked on the part (design, checking, and approval), the name of the company, the drawing number, and other relevant information.

In addition, it includes technical details such as the measurement units, the angle of projection, the surface polish criteria, the scale, and the material of construction. Title blocks are used for a better understanding of all the parts of the technical drawing. 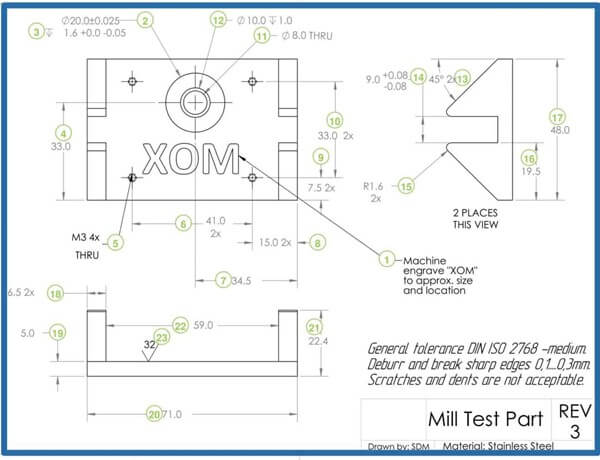 In large or complicated technical drawings, coordinates are commonly employed and positioned along the drawing’s boundaries. When discussing the drawing’s content, these points of reference serve as a guide.

An engineering drawing doesn’t have equal lines. A part’s visible and concealed boundaries, centerlines, and other details can all be displayed using the various choices. The following are the types of lines.

Lines that are not visible to the naked eye can reveal information that would otherwise be obscured by the designs. The length of an interior step in a turned part can be shown using hidden lines instead of a section or cutout view. 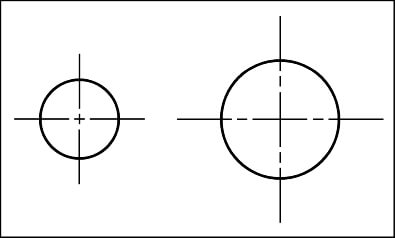 Parts with holes and symmetrical features can be shown by using center lines. Symmetry can reduce the number of dimensions in a drawing and make it more visually appealing, making it easier for the reader to comprehend.

Extension lines are used to describe the data being collected. Two arrowheads separate the extension lines on the dimension line from the measurement above (or inside, as shown in the image above). 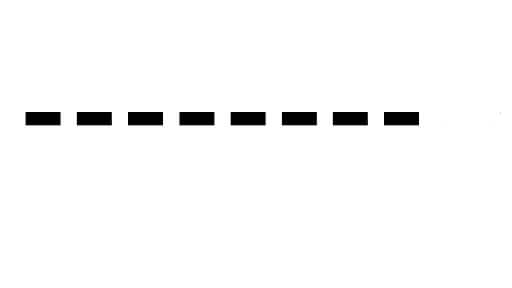 When a view is broken, break lines appear. In the case of a part that is 3000 mm long and 10 mm wide and has the same geometric qualities, a break-out provides all the information without taking up too much space.

CNC machines necessitate complete views of the workpieces in order to cut them. Alternatively, the manufacturing engineer will have to re-create the entire part from the measurements alone. 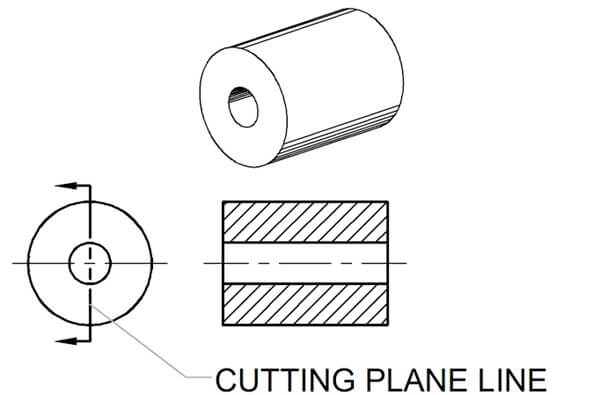 The cutting plane lines illustrate the path of the cutout in a cutout view. The A-A cutting line may be seen here bringing both types of holes into view. 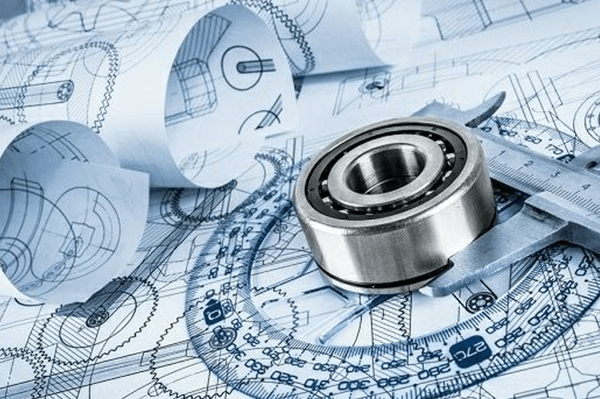 A Dimension is a numerical value that expresses the size, position, orientation, form, or any other geometric properties of a part in the relevant units of measurement. Dimensioning, thus, is the process of depicting on a drawing the size of an object, as well as any other data critical to its design and operation, by means of lines, numerals, symbols, notes, etc.

An object’s shape and size must be known before it can be constructed. As a result, an engineering drawing depicting the object’s form, dimensions, and other pertinent data is required. The size and location of various characteristics of the object are indicated by providing the dimensions. For example, it is used to determine the object’s dimensions, the name of its parts, and the diameter of the hole.

In addition, when parts are machined, it is often difficult to guarantee that a 10mm length can be 100% 10mm, and the final product maybe 9.9mm or 10.2mm. This can be done by defining tolerances to limit the upper and lower limit deviations and helping suppliers understand important dimensions.

Used to express the external structure of the part shape. There are basic and auxiliary views, the latter including orient view, partial view, an oblique view. 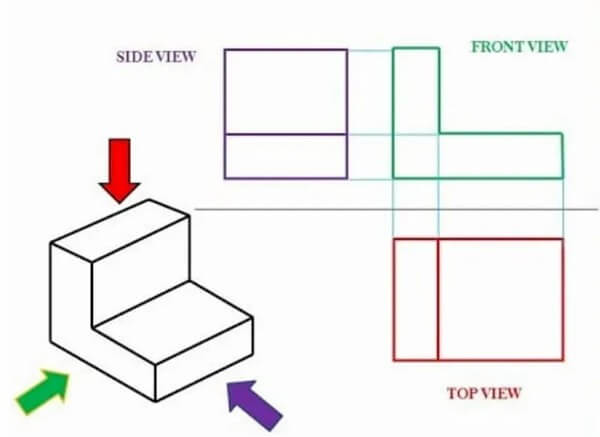 Thus, a 2D view must provide all the information necessary for the production of a part. Any length distortion is avoided with this representation.

As the most common method for conveying all the necessary information, multiview drawings often include three views:

It’s conceivable that a few extra views are required to display all of the information. Less is definitely more.

Regionally, the views are a little different. Compare the US and ISO layouts by taking a look at this image.

Drawing layouts in ISO and the United States are in direct opposition to one another.

The one on the left is known as a first-angle projection. There is a top view, a front view, a side view, and so on in this arrangement. In Europe, the ISO standard is most commonly used.

A third-angle projection may be seen to the right of the image. All of these images are arranged in chronological order. The United States and Canada are particularly fond of this arrangement. 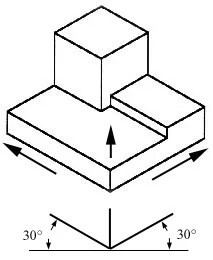 The figure above is an example of an isometric view. Isometric drawings depict three-dimensional objects. When compared to the front view, all vertical lines remain vertical, and parallel lines are depicted at a 30-degree angle.

Vertical and parallel lines have the correct length. Using a ruler and the scaling of the picture, for example, you can simply measure the length of a paper drawing. Angled lines are not the same.

It’s critical to know the difference between an isometric view and a perspective view. In art, perspective views depict an object as it appears to the human eye. Engineers do not rely on optical illusions, but rather stick to the facts. 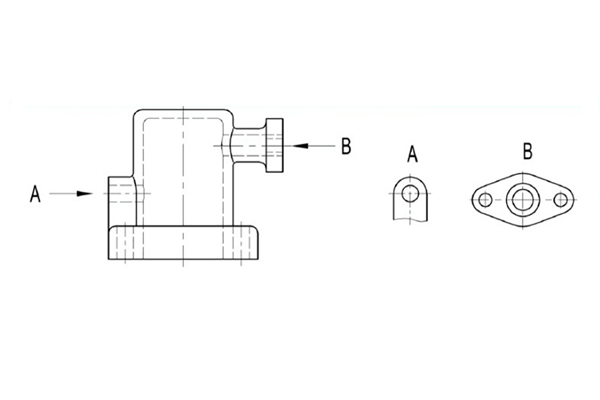 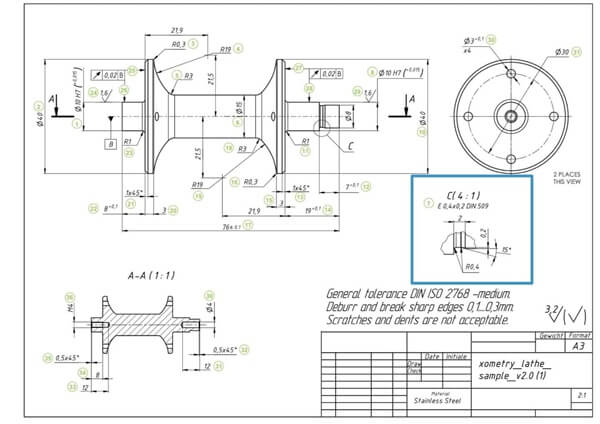 As a callout or segment in other views, a detailed view shows the model in its entirety. The detail view often depicts the model at a much finer level of detail than the parent view does. 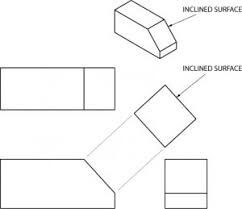 An auxiliary view is an orthographic view for non-horizontal or non-vertical planes. It aids in the presentation of inclined surfaces without distortion. 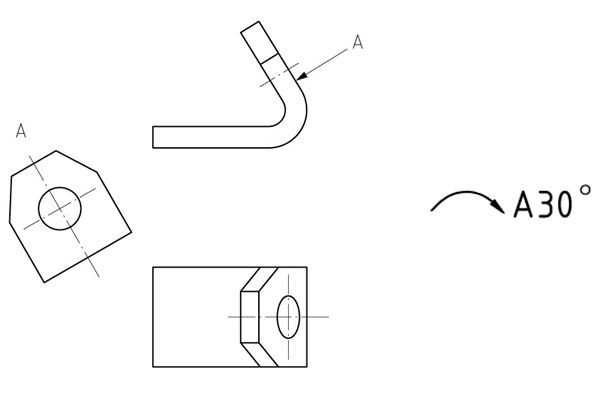 ou can better depict the interior of a complicated object, such as an automobile’s engine block, by sketching the object as it would appear if cut apart. In this manner, the sketch’s many hidden lines are erased.

Sectioning is the practice of drawing an object’s interior structure by illustrating it as if it had been cut apart. Sectioning is a common feature of many industrial designs.

Sectioning the block above results in blocks A and B, as shown. An object in a painting or sketch can be sectioned in any way you like, just like an apple. 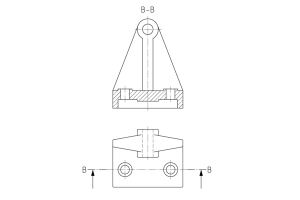 This type of section is called a full section when a cutting plane line passes completely through an object.

Sectioning an object can be done whenever a closer look is necessary. This object has been cut into two halves, as you can see. 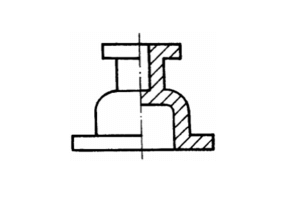 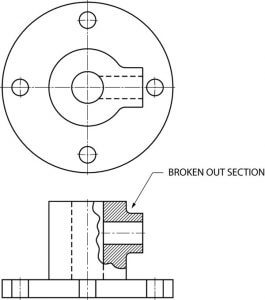 Views with broken-out sections can be used to reveal the model’s inner details by cutting away material at a predetermined depth. The broken-out part is defined by a closed profile, typically a spline. Users can enter a precise depth or reference a place in another view to specify a depth.

The use of partial views in technical drawing documentation makes it easier to provide the needed details on parts. A lot of the time, it’s easier to show more detail about a part when you use partial views of the part. 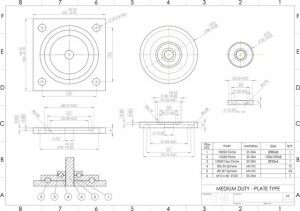 Engineers often make the mistake of trying to incorporate all the information about each individual part in an assembly drawing. This can be avoided if you keep in mind that the goal of these technical drawings is to facilitate the assembly process.

In order to accomplish this, you can utilize tools like section views, numbered pieces, general dimensions, cuts, and detail views (or close-ups).

Regardless of the method of attachment, it should be apparent where each component goes and how it is attached. For your benefit, make sure the bill of materials has accurate information about part numbers, names, and quantities. All of this will help you design assembly drawings that will make your projects on the machine shop more efficient.

(1) The important dimensions of the parts must be marked directly.

(2) Avoid the appearance of closed dimensions.

(3) Mark the size to facilitate processing and measurement.

2. View errors. Views are incorrectly placed or do not correspond to each other and do not clearly express the design intent.

4. The technical requirements of the parts (including dimensional tolerances, form tolerances, surface roughness) are not marked standardization.

For designers, engineers and machinists, engineering drawings are one of the best ways to communicate ideas and perspectives. 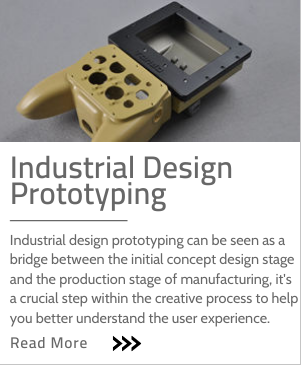