A physical prototype can be anything from a simple handmade model to a fully operational model representing how the conceptual design will correspond to real-world conditions. Nowadays physical prototypes are easy to be manufactured by the introduction of various rapid prototyping techniques which are time-saving as well as cost-effective making a large number of effective physical prototypes in lesser time attracting a lot of customers due to better aesthetics and finishing of a physical prototype.

It is a type of physical prototype developed such that it provides enough information about the product being developed that is to be used by the researchers for further research purposes.
Rapid Prototyping: Physical Prototyping Development

3D printing is a common rapid prototyping technique nowadays in which material is solidified under the action of a computer by using the data from a CAD model to form the physical prototype. The 3D printer is becoming popular among domestic and industrial customers because the material used in 3D printing is readily available and cheaper as compared to other manufacturing techniques.

CNC machines are also being employed by the manufacturers to covert the conceptual model into a physical prototype. It is a numerically controlled machine that uses G-codes and M-codes for cutting, drilling, boring and other manufacturing operations. The CAD model is converted into manufacturing directives using CAM software. The transformation of directives into G-codes and M-codes enables the machine to produce a highly accurate physical prototype. Modern CNC machines being used these days are 5-axis which enables the tool to move along 5 different axes at the same time enabling the machine to produce highly effective and accurate parts

The difference between the 3D printer and CNC is marked by the material being used for manufacturing. CNC is generally used for metallic prototypes, whereas 3D printer usually utilizes ABS, PLA and soft PLA for development of physical prototypes. Moreover, a typical 3D printer utilizes much less space as compared to a CNC, lathe or precision grinding machine making it a much suitable option for the manufacturers. But generally, the choice of rapid prototyping technique usually depends upon the choice of material for physical prototype. Other rapid prototyping techniques being employed these days are

1. Determination of Production Cost and Issues

2. Evaluation and Testing of Product

3. Sale of the Product

A new design or product can easily be patented. With a physical prototype in hand, it is easy to see which features of the design can be patented and which parts need to be edited to be patentable. This protects the manufacturers from any lawsuit that can be filed against them in case of any similarity with an already patented product. Moreover, it is much easy to describe the key features to a patent attorney with a physical prototype rather than a conceptual design so that the patent can be filed.

Difference between a Prototype and Actual Product

Although the engineers and developers try their best to minimize the differences between the prototype and the actual product. But in general, a prototype may differ the actual product in terms of the material used, the machining process, appearance etc.

A physical prototype also attracts more customer as compared to conceptual design. And with the development of software and rapid prototyping techniques, it is no difficult to produce a prototype in much lesser time and with greater accuracy. It may differ a bit from actual product but it is effective in the sales of product in modern industries. 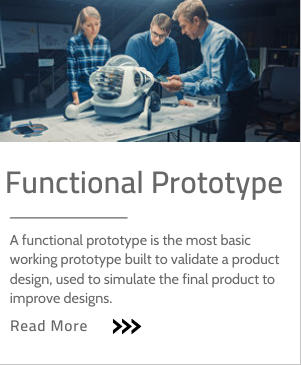