A water filter removes or reduces impurities of water by using a mechanical barrier, chemical process, or biological process.

You might have seen in a TV show the English adventurer Bear Grylls has once used charcoal to act as a filter to eliminate harmful impurities in the water in the wild. I would say that using charcoal is the combination of using mechanical barriers and biological processes.

In today’s society, a water filter is a very common product and the market is pretty much saturated. It is probably very difficult to create a new water filter that stands out among so many other water filters.

For example Elon Musk and Tesla, today when we think of Tesla, it is an absolute success story.  Elon Musk has become the richest man in the world, partially due to Tesla’s success. Before the birth of Tesla, there were already a lot of fuel-driven cars in the market. Most of the consumers were content about what they could get.  Although cars are mature products, electric cars are not. If you look at facts and watch the Elon Musk interview with “60 Minutes” where he almost burst into tears, you’d know how difficult it is to create a new product. As smart and optimistic as Elon is, there were times Tesla was on the brink of clasping. However, against all odds, Tesla and Elon Musk succeeded, even when Elon’s idols didn’t believe him.

What I’m trying to say is that perhaps creating a new product is never easy. It’s always full of obstacles and it always needs a lot of hard work, – just like the manufacturing industry. Besides good ideas, drawings and processes, we also need inspirational figures like Elon Musk to motivate our inner selves.

As a prototype manufacturer, we could see that “smart technology” is all the rage in current years. If you’d like to create a new water filter, you might try developing a smart water filter.

We could make a concept prototype to prove your idea, no matter plastic or metal components. We even offer practical suggestions before launching into pilot production and mass production.

Colorless PC/ PMMA are usually used when the aesthetics requirements are high, or a part needs to be tested optically, such as automotive lens, especially PMMA parts, they could have a surface roughness of Ra 0.025- 0.05μm. Yet, sometimes, when a part is too big for CNC machines, this part will need to be split and glued. Although clear PC/ PMMA parts bonded by UV glue are hardly affecting the part’s aesthetics anymore, when it comes to the parts that need to hold water, the glued area might not be strong enough. To endure the part that holds water well, it is better to make the part monolithic.

Colorless polyurethane used for vacuum casting also is an ideal way to make the transparent part. Vacuum-casted clear part can almost be made optically clear. We use a lot of this material and process to make automotive lenses as well. Vacuum casting is also called silicone molding. A silicone mold in one vacuum-casting process can be re-used about 15 times, which means from the second part to the fifteenth part, there will be no cost for the mold. Therefore, vacuum casting is often the most cost-effective method when the quantity is above 2 and less than 100 pieces. Since the customer only needs 1 prototype and wants it to be as cheap as possible, vacuum casting is not the best method here.

The other way to make a clear prototype is by Stereolithography (3D printing). The only material available is photosensitive resin. Generally speaking, 3D printing could make rather large parts. In this case, if using 3D printing, the components won’t need to be split into several parts and glued. The components can be printed as monolithic, unlike the CNC-machining method, in which most of the components will have to be split and glued, and there are some areas the CNC end-mills couldn’t reach. The clear parts made by 3D printing will be much less clear than polyurethane parts and PC/ PMMA parts, sometimes clear bubbles might occur inside the clear parts during the process. After calculation, we found that the 3D printing method is the cheapest one. The customer eventually chose this method. 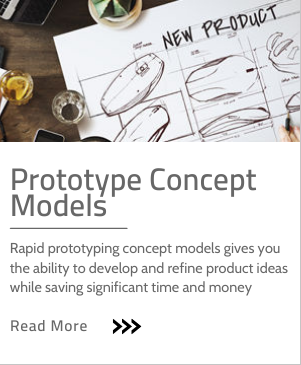