CNC machining is a mainstay in industrial manufacturing because of its high functionality and precision, among other benefits. In the fabrication of a product, manufacturers may use one or more machining operations, such as CNC turning and CNC milling operations.

The CNC turning definition involves the removal of pieces of material as the workpiece rotates against the cutting tool. This article comprehensively describes CNC turning – the procedure, the machines for the process, and its application. So, without much ado, let’s get into it.

What Is CNC Turning?

CNC turning is a typical subtractive manufacturing process that uses a cutting tool to remove portions of a material from its exterior. The workpiece rotates (continued turning) as tidbits get chipped off till it reaches the desired shape, diameter, and size of the end product.

However, the cutting tool, typically a single-point end, is non-rotary. Instead, the workpiece only rotates around it. CNC lathes are the typical machines used industrially for achieving turning operations.

Meanwhile, CNC turning is suitable for cutting metals, wood, plastics, and other polymers. Also, since the process uses computer-generated programs and codes, its products are of high dimensional accuracy – one of its main advantages.

CNC turning operations may be pretty complicated. However, after converting your CAD files into a program recognizable by the CMC machine, you need to set up the machine ready to kick start the turning process. 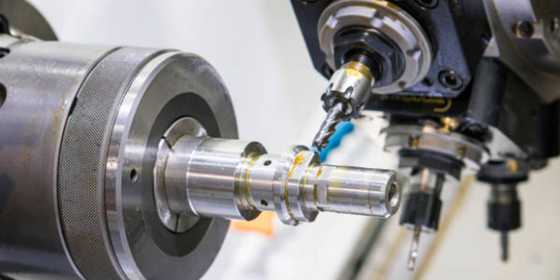 Turning involves rotating and spinning a workpiece as the cutting tool starts to chop out pieces of the material from the exterior. Usually, the machined material is cylindrical or round. Though in some cases, especially when using a compatible adapter, turning can function well for materials of varying shapes.

The cutting tool continues to make cuts as the workpiece spins in the machine till it reaches the desired programmed shape. Notably, CNC lathes or turning centers have different tools in the turret, all controlled by computer programs and codes. However, machines with the capacity to hold more tools are more sophisticated with more capabilities, making them more suitable for complex designs.

Turning machines and CNC lathes come in different variants, some possessing unique cutting features, making them ideal for specific operations. Below is a brief description of different types of CNC turning processes. 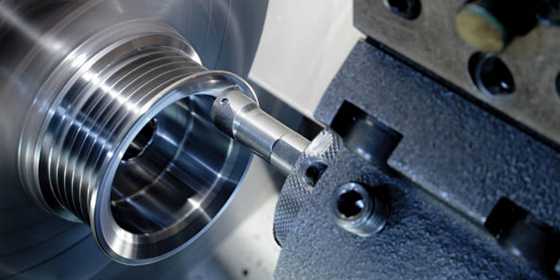 Straight turning involves using a cutting tool to cause a uniform reduction of the diameter of a workpiece. The technique aims to machine the material into a specified thickness. It quickly removes part of the material, preventing variation in the product diameter. It is sometimes referred to as rough turning, requiring extra finishing to obtain dimensional accuracy.

This operation involves introducing cut patterns of serrated, angled, or crossed lines into the surface of a workpiece. The process typically introduces a firm grip, as the pattern enhances friction. It is also suitable for fabricating bolts and nuts for threaded holes. Notably, the operation may require the need for specially designed knurling tools.

Parting is a machining technique that uses a single-point cutting tool to create a deep gouge into a material, removing its internal components. As the name suggests, it results in producing parts or cuts off a section of the original piece.

Taper turning involves gradually reducing a material’s diameter from one end to another. The angular motion between the material and the cutting tool causes the transition and reduction in the diameter of the workpiece. Like most turning operations, the end product is cylindrical shaped.

Threading is another CNC turning process that involves the movement of a cutting tool along the sides of the material, cutting threads into the external components of the workpiece. Threads are helical grooves with specific lengths and pitch.

This turning operation creates a narrow cut – a groove, in the workpiece. It involves the action of a pointed tool head against the material, cutting with equal width as the cutting tool. However, machining grooves of wider diameter is possible with the aid of multiple cutting tools.

What Materials are Suitable for CNC Turning? 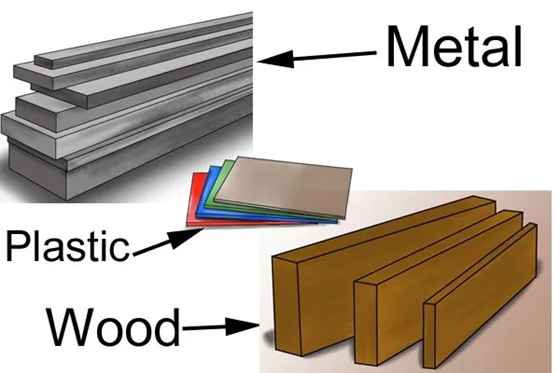 One of the significant advantages of CNC machining is its compatibility with a vast range of materials. Likewise, most metal and plastic materials are ideal for CNC turning processes. They are:

Since each material possesses varying structural integrity, it may require different lathes or turning centers with unique specifications like the feed rate and turning speed.

Indeed, lathes are the typical machines used for turning. However, these devices exist in different kinds, each better suited for specific turning operations. There are four different CNC turning machine types for your machining projects.

These lathes have all the features of a typical lathe, making them one of the most populous machines for various industrial applications. However, they are suitable for both turning and boring operations. Also, being a CNC machine, it operates on computer programs.

Similar to a horizontal lathe, but as you’d expect, the main difference is how it holds the workpiece. The material is positioned vertically – from the bottom before rotation, spinning, and cutting occurs. As a result, these machines are most suitable for operation with space limitations. Also, they are best suited for heavy and sturdy workpieces. 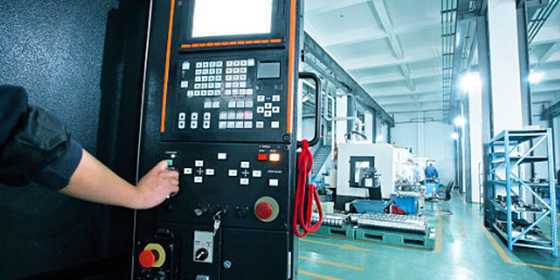 Horizontal turning centers are enclosed devices with drilling and milling functionalities. As the name indicates, the turning center has a horizontal orientation with tools mounted above as they rotate and cut into the workpiece and depends on gravity to remove the cuts.

This device acts as a combo of a horizontal turning center and a CNC miller. Its design makes the rotating chuck close to the ground – making it easier to work with large workpieces.

The Different Components of A Turning Lathe

Though there are different turning lathes, they practically possess similar components. So let’s take a brief look at each element of a typical lathe machine. 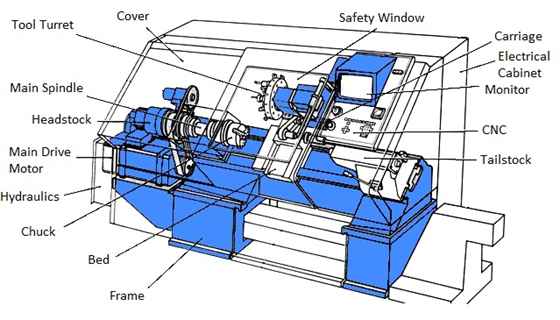 The panels are more or less the brain box of the machines. It refers to the control house, where machinists and technicians input the computer programs and codes. The CNC control panel has a set of keys for controlling all the device operations, including starting, entering new programs, and ending a project.

The spindles are the heart of the headstock. It is the rotating axis of a turning lathe with a shaft. Also, it is not uncommon for the tailstock to also have spindles.

The headstocks act as clamps holding other components of the lathe in place. It contains gears, spindles, chucks, and control levers, among other machine pieces.

The opposite end to the headstock is the tailstock. It’s a non-rotatory center capable of boring operations.

The beds are the most significant piece in any turning lathe, as all other components are attached to it, including the headstock, chucks, tailstocks, etc. In addition, it’s a large horizontal structure capable of further extension to accommodate massive workpieces.

The chuck is another vital component of the lathe machine. It helps to hold (grip) the material for machining.

The carriage is between the headstock and the tailstock containing other components like the saddle, cross slide, and apron. It acts as a guide for the cutting tool as it cuts through the exterior of the workpiece.

The cutting tools include the tool bits that remove pieces of the material during turning. Often, the cutting and turning process may depend on the kinds of cutting tools present in the lathe device.

The tool turrets are the tool holders for the lathe. The size and shape of a typical tool turret determine the number of tools it can carry.

The foot pedals help to open and close the tailstock or the chuck quickly.

We already established that there are different turning operations. Therefore, there are various lathe cutting tools better suited for each process. Let’s quickly examine some of these tools. 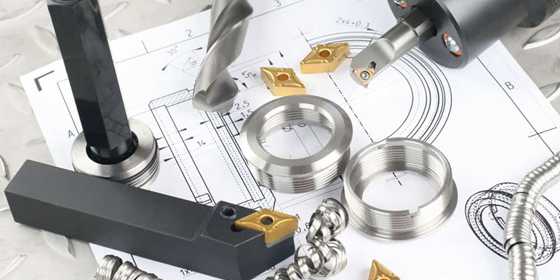 These are lathe machines suitable for cutting flat surfaces that are right-angled to the material’s rotating axis. During the process, the tool holder on the carriages clamps the cutting tool, which then cuts through, perpendicular to the rotating axis.

This cutting tool is suitable for making external and internal cuts through a material. In addition, as the name indicates, they are ideal for cutting threads on lathe machines.

Boring bars are not exactly turning tools. Instead, they are single-point tools suitable for making internal cuts into a workpiece – boring holes. The devices essentially enlarge the diameter of a pre-existing hole.

Grooving tools are suitable for cutting out channels (grooves) and features like O-rings into a workpiece. In addition, they are ideal for creating contours into a material that allows for the necking of different workpieces with an excellent fit of each part.

These lathe tools are equipped with specific designs and patterns to improve the grip of the workpiece. When pressed against the material, they imprint their knurled patterns. Therefore, they are useful in making handles for equipment, bolts, nuts, etc.

CNC turning and machining processes are highly beneficial to different manufacturing sectors. Below we will take a brief look at the applications of turning operations. 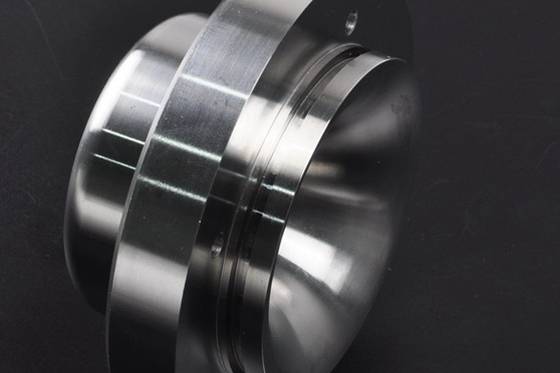 CNC turning operations are pretty common in the manufacture of components of automobiles that help improve the functioning of the vehicle. The process is compatible with manufacturing metal components like cylinder blocks and plastic components like dashboard components.

CNC turning is suitable for creating circuit boards, among other electrical components. Since it’s an extremely precise machining process, products are electronically efficient, meeting all requirements and specifications.

The aviation industry requires a process like CNC turning and machining because of its high dimensional accuracy. They are suitable for designing steel parts for the shuttle and aircraft fasteners and internal components.

Having obtained detailed information about CNC turning, you know if that’s what your fabrication requires. The next thing is to find the right partner to help fabricate your designs. WayKen is an expert in offering turning services. With nearly 20 years of machining experience, our machinists can handle all types of turning operations and other machining technologies.

We are also an ISO 90001:2015 certified company, so you are assured that all our products are the high standards in the industry. Meanwhile, we provide on-demand solutions per your request at competitive pricing. In addition, with our DFM analysis, we can provide you with professional advice on how to improve your design.

Upload your CAD files today to get an instant quotation>>

Reading through this well-detailed article, you should comprehensively know what the process entails. Therefore, you know when to adopt the technique for your fabrication.

What are the machining axes of lathes?

CNC lathes may come in different configurations, better defined by the axes’ movement. They include the following:

What is the difference between turning and milling?

Turning involves the rotation of a workpiece against a non-rotating single-point cutting tool, while milling uses rotary cutters to remove components of a stationary workpiece. In addition, while turning products are often cylindrical or conical, the end products of milling have flat surfaces.

What are the three main movements in turning operations?

During turning, the following movements occur: 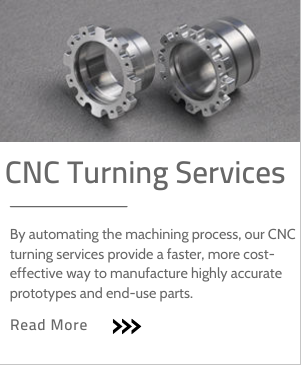